I’ve put together two online, interactive, demonstrations of chaotic motion. One is 2D and the other is 3D, but both are rendered using WebGL — which, for me, is the most interesting part. Both are governed by ordinary differential equations. Both are integrated using the Runge–Kutta method, specifically RK4.

Far more knowledgeable people have already written introductions for chaos theory, so here’s just a quick summary. A chaotic system is deterministic but highly sensitive to initial conditions. Tweaking a single bit of the starting state of either of my demos will quickly lead to two arbitrarily different results. Both demonstrations have features that aim to show this in action.

This ain’t my first chaotic system rodeo. About eight years ago I made water wheel Java applet, and that was based on some Matlab code I collaborated on some eleven years ago. I really hope you’re not equipped to run a crusty old Java applet in 2018, though. (Update: now upgraded to HTML5 Canvas.)

If you want to find either of these demos again in the future, you don’t need to find this article first. They’re both listed in my Showcase page, linked from the header of this site.

First up is the classic double pendulum. This one’s more intuitive than my other demo since it’s modeling a physical system you could actually build and observe in the real world. 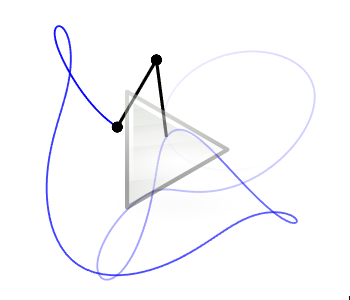 I lifted the differential equations straight from the Wikipedia article (derivative() in my code). Same for the Runge–Kutta method (rk4() in my code). It’s all pretty straightforward. RK4 may not have been the best choice for this system since it seems to bleed off energy over time. If you let my demo run over night, by morning there will obviously be a lot less activity.

I’m not a fan of buttons and other fancy GUI widgets — neither designing them nor using them myself — prefering more cryptic, but easy-to-use keyboard-driven interfaces. (Hey, it works well for mpv and MPlayer.) I haven’t bothered with a mobile interface, so sorry if you’re reading on your phone. You’ll just have to enjoy watching a single pendulum.

Here are the controls:

To witness chaos theory in action:

At first it will appear as single pendulum, but they’re actually all stacked up, each starting from slightly randomized initial conditions. Within a minute you’ll witness the pendulums diverge, and after a minute they’ll all be completely different. It’s pretty to watch them come apart at first.

It might appear that the m key doesn’t actually do anything. That’s because the HTML5 Canvas rendering — which is what I actually implemented first — is really close to the WebGL rendering. I’m really proud of this. There are just three noticeable differences. First, there’s a rounded line cap in the Canvas rendering where the pendulum is “attached.” Second, the tail line segments aren’t properly connected in the Canvas rendering. The segments are stroked separately in order to get that gradient effect along its path. Third, it’s a lot slower, particularly when there are many pendulums to render. 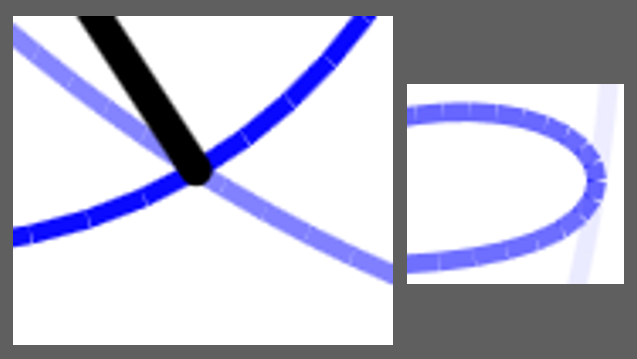 In WebGL the two “masses” are rendered using that handy old circle rasterization technique on a quad. Either a triangle fan or pre-rendering the circle as a texture would probably have been a better choices. The two bars are the same quad buffers, just squeezed and rotated into place. Both were really simple to create. It’s the tail that was tricky to render.

When I wrote the original Canvas renderer, I set the super convenient lineWidth property to get a nice, thick tail. In my first cut at rendering the tail I used GL_LINE_STRIP to draw a line primitive. The problem with the line primitive is that an OpenGL implementation is only required to support single pixel wide lines. If I wanted wider, I’d have to generate the geometry myself. So I did.

Like before, I wasn’t about to dirty my hands manipulating a graphite-filled wooden stick on a piece of paper to solve this problem. No, I lifted the math from something I found on the internet again. In this case it was a forum post by paul.houx, which provides a few vector equations to compute a triangle strip from a line strip. My own modification was to add a miter limit, which keeps sharp turns under control. You can find my implementation in polyline() in my code. Here’s a close-up with the skeleton rendered on top in black: 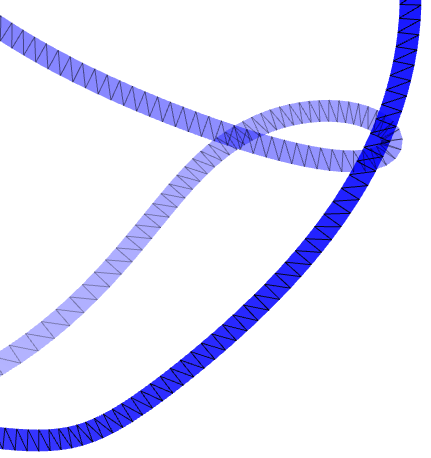 For the first time I’m also using ECMAScript’s new template literals to store the shaders inside the JavaScript source. These string literals can contain newlines, but, even cooler, I it does string interpolation, meaning I can embed JavaScript variables directly into the shader code:

If you’ve looked at my code you might have noticed something curious. I’m using a lot of destructuring assignments, which is another relatively new addition to ECMAScript. This was part of a little experiment.

One of my goals for this project was zero heap allocations in the main WebGL rendering loop. There are no garbage collector hiccups if there’s no garbage to collect. This sort of thing is trivial in a language with manual memory management, such as C and C++. Just having value semantics for aggregates would be sufficient.

But with JavaScript I don’t get to choose how my objects are allocated. I either have to pre-allocate everything, including space for all the intermediate values (e.g. an object pool). This would be clunky and unconventional. Or I can structure and access my allocations in such a way that the JIT compiler can eliminate them (via escape analysis, scalar replacement, etc.).

In this case, I’m trusting that JavaScript implementations will flatten these destructuring assignments so that the intermediate array never actually exists. It’s like pretending the array has value semantics. This seems to work as I expect with V8, but not so well with SpiderMonkey (yet?), at least in Firefox 52 ESR.

I briefly considered using Math.fround() to convince JavaScript to compute all the tail geometry in single precision. The double pendulum system would remain double precision, but the geometry doesn’t need all that precision. It’s all rounded to single precision going out to the GPU anyway.

I ultimately decided not to bother with this since it would significantly obscures my code for what is probably a minuscule performance gain (in this case). It’s also really difficult to tell if I did it all correctly. So I figure this is better suited for compilers that target JavaScript rather than something to do by hand.

The other demo is a Lorenz system with its famous butterfly pattern. I actually wrote this one a year and a half ago but never got around to writing about it. You can tell it’s older because I’m still using var. 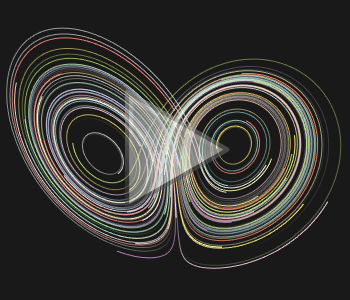 Like before, the equations came straight from the Wikipedia article (Lorenz.lorenz() in my code). They math is a lot simpler this time, too.

This one’s a bit more user friendly with a side menu displaying all your options. The keys are basically the same. This was completely by accident, I swear. Here are the important ones:

Witnessing chaos theory in action is the same process as before: clear it down to a single solution (C then a), then add a bunch of randomized clones (c).

There is no Canvas renderer for this one. It’s pure WebGL. The tails are drawn using GL_LINE_STRIP, but in this case it works fine that they’re a single pixel wide. If heads are turned on, those are just GL_POINT. The geometry is threadbare for this one.

There is one notable feature: The tails are stored exclusively in GPU memory. Only the “head” is stored CPU-side. After it computes the next step, it updates a single spot of the tail with glBufferSubData(), and the VBO is actually a circular buffer. OpenGL doesn’t directly support rendering from circular buffers, but it does have element arrays. An element array is an additional buffer of indices that tells OpenGL what order to use the elements in the other buffers.

Naively would mean for a tail of 4 segments, I need 4 different element arrays, one for each possible rotation:

With the knowledge that element arrays can start at an offset, and with a little cleverness, you might notice these can all overlap in a single, 7-element array:

Like before, I was very careful to produce zero heap allocations in the main loop. The FPS counter generates some garbage in the DOM due to reflow, but this goes away if you hide the help menu (?). This was long enough ago that destructuring assignment wasn’t available, but Lorenz system and rendering it were so simple that using pre-allocated objects worked fine.

Beyond just the programming, I’ve gotten hours of entertainment playing with each of these systems. This was also the first time I’ve used WebGL in over a year, and this project was a reminder of just how working with it is so pleasurable. The specification is superbly written and serves perfectly as its own reference.